They feel shooting sportsmen choosing promotional ammunition deserve a quality product at an affordable price. So, at Fiocchi, they don’t compromise their high standards when producing their Fiocchi Shooting Dynamics promotional line. They employ the same manufacturing standards as in their Fiocchi Premium loads. Cleaner burning powders, consistent payloads of rounder shot and thier high standard of quality control are what make the difference between Fiocchi promotional ammunition and the other brands. They market their Fiocchi Shooting Dynamics shotshell line on its overall value- not on price alone.

Target loads are generally considered to cover shot sizes 9, 8, 7-1/2 and 7. Your choice of shot size will depend on the sporting regulations you are shooting within, the distance of your target, and the chokes in your shotgun. Due to the smaller shot size and therefore greater number of pellets per ounce, some shooters choose to shoot closer targets with smaller shot such as size 9. This ensures a better chance of connecting with the target. For longer targets a heavier, more massive shot is preferred due to its ability to carry momentum further than the lighter, smaller shot. 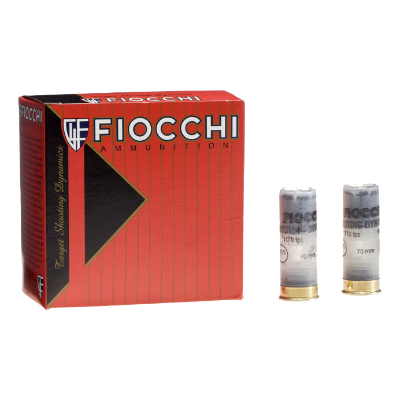