Sine wave inverters provide mains power of a similar quality to that which you would expect from the power point (GPO) at home. They are suitable for powering mains operated equipment in locations where a normal mains supply is not available, including items that are sensitive to stepped (modified sine wave) output such as digital clocks, PA equipment, or plug-pack powered equipment etc. Sine wave inverters are also more efficient. These inverters also incorporate electrical isolation between battery and output voltages to prevents mains voltages from reaching the battery terminals in the event of equipment failure. This is particularly important when inverters are installed in parallel to a normal mains supply as a stand-by or alternative power supply for caravans or buses etc. The inverters are rated for continuous operation and can deliver double their rated power (for short periods) to support the start-up surge required by some equipment. They are housed in a strong aluminium case and feature heavy-duty screw down input connectors, a temperature controlled cooling fan, 3 pin 230VAC output sockets, on/off switch, and LEDs to indicate normal operation, overload condition and over temperature. The inverter output is fully protected against short circuits and overload.All models suitable for a variety of mobile and permanent power installations and each model has been rigorously tested to ensure the best performance for your application. All models feature a standard 230VAC mains outlet as well as a USB port for powering and charging USB devices.• Electrically isolated for safety • Output frequency of 50Hz • Output overload protection with three • Input fuse protection • Efficiency between 84-91% stage alarm and shutdown• Includes 5m wired on/off switch 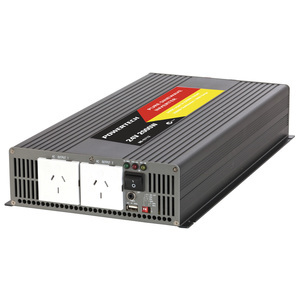