Winchester Super-X ammunition has developed a reputation as being hard hitting and reliable. This ammunition is loaded with Super-X Soft Point Bullets which are designed for rapid, controlled expansion and maximum impact. This ammunition is new production, non-corrosive, in boxer primed, reloadable brass cases.

The .22 Hornet is a vermin, small-game and predator centerfire rifle cartridge. It is considerably more powerful than the .22 WMR and the .17 HMR, achieving higher velocity with a bullet twice the weight. The Hornet also differs very significantly from these in that it is not a rimfire but a centerfire cartridge. This makes it handloadable and reloadable, and thus much more versatile. It was the smallest commercially available .22 caliber centerfire cartridge until the introduction of the FN 5.7x28mm.

The .22 Hornet fills the gap between such popular varmint/predator cartridges as the .22 WMR and the .223 Remington. In regard to muzzle velocity, muzzle energy and noise, it is well suited to vermin and predator control in relatively built-up areas.

Published handload data from major handloading-product companies shows how versatile the .22 Hornet can be. According to the Hodgdon reloading data, the heavier bullets show a serious affinity for Lil’Gun smokeless powder to produce much higher velocities than other powder with heavy bullets in this small case. 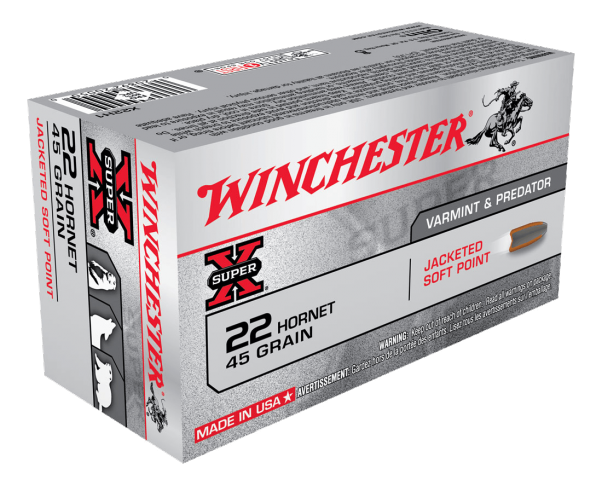